Islands in the net 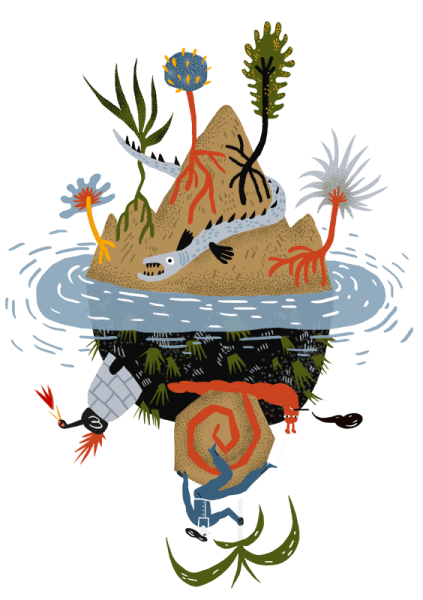 Islands in the net

T.A.Z.: The Temporary Autonomous Zone was published in 1991 by thinker and activist Hakim Bey (pseudonym). The book, which preceded the commercial internet, describes an imaginary public space beyond any government’s reach - a connected zone where people could be free. Thirty years later, with the rise of giant corporations like Google, Facebook, Amazon, and Apple, as online regulation and censorship are on the rise, a question arises, is the internet a public space? Is it augmenting or rather restricting people’s freedom and autonomy?

In our project, which will include a discussion group and a virtual and physical exhibition, we wish to return to the groups of artists, researchers, and activists who leveraged the internet by attempting to establish temporary autonomous zones at the heart of commercial online platforms. These projects tried to challenge the internet’s emerging power structures through artistic and discursive actions designed to give the public a voice and an agency.

To close each of the explanation windows, click on another object in the exhibit.

All the quotes in this exhibition are from the book TAZ - Temporary Autonomous Zone by Hakim Bey.

The sea-rovers and corsairs of the 18th century created an “information network” that spanned the globe: primitive and devoted primarily to grim business, the net nevertheless functioned admirably. Scattered throughout the net were islands, remote hideouts where ships could be watered and provisioned, booty traded for luxuries and necessities. Some of these islands supported “intentional communities,” whole mini-societies living consciously outside the law and determined to keep it up, even if only for a short but merry life.

The internet is perhaps the greatest experiment ever in global human collaboration. In its good moments, the internet is a festival of altruism, representing a post-national future of invention and choice, where everyone enjoys equal access to resources and capabilities. On occasion, it enables the rich to get even richer through mechanisms that might drive mass violence and harassment, highlighting negative aspects of human nature.

Therefore, in 2017, when Reddit, the largest online discussion platform, announced an experiment in collaborative creation, many were worried about the outcome. Reddit launched Place, a panel of one million pixels, where users could color a pixel in one of 16 colors. For the first few hours, the behavior was random and chaotic, with many competing with each other, but collaborations slowly formed: one group painted the rainbow flag, another reproduceD Van Gogh’s Starry Night, and a third - the Mona Lisa. The 72 hours experiment briefly showed the web’s potential role as a spontaneous collaborative creation rather than a platform dedicated to attention-grabbing activities. The non-copyrighted million pixels image has become a famous symbol that is still being shared.

Recently Bruce Sterling, one of the leading exponents of Cyberpunk science fiction, published a near-future romance based on the assumption that) the decay of political systems will lead to a decentralized proliferation of experiments in living: giant worker-owned corporations, independent enclaves devoted to “data piracy,” Green-Social-Democrat enclaves, Zerowork enclaves, anarchist liberated zones, etc. The information economy which supports this diversity is called the Net; the enclaves (and the book’s title) are Islands in the Net.

According to a famous online saying, “the cloud is just someone else’s computer.” Many of us are unaware that the information and actions we perform with it are stored inside guarded machines located in gated facilities across the world. We don’t know who has access to this information. The internet’s once imagined vision of public or personal web servers turned into a reality where our data is divided among tech giants, stored by Apple, Google, Amazon, Facebook, and Microsoft, dependable as each company’s policy and financial power.

Olia Lialina, who is considered one of the first network artists and the first online GIFs model, captured herself swinging on a swing on a summer day. The film was edited into individual frames, with each frame stored on her friend’s servers - the digital work transitions through the servers worldwide. Lialina’s movement flows thanks to the fast connection, swinging freely, unrestricted, through network nodes, from one address to another, illustrating the vision of the internet as free space.

Are we who live in the present doomed never to experience autonomy, never to stand for one moment on a bit of land ruled only by freedom? Are we reduced either to nostalgia for the past or nostalgia for the future? Must we wait until the entire world is freed of political control before even one of us can claim to know freedom?

Are you bothered by the effect Facebook has on your life? On your mental health? Privacy? On democracy? What will it take to make Facebook safer, stricter censorship, or easing policies? Supervision or freedom?

Artist Ben Grosser develops browser extensions that generate entertaining, active interventions in social media. One work is dedicated to removing quantitative indicators from Facebook, Twitter, and Instagram, erasing any mention of the number of likes, followers, or comments as a critique of users’ enslavement to quantifying and scoring. His Safebook project takes it one step further, leaving only the empty shapes of Facebook’s UI without the content. Once installed, the browser extension will remove text, images, and videos from Facebook’s graphic containers. Facebook effectively becomes an abstract geometric work. According to Grosser, the site’s interface has become so ingrained that many can still post, interact, and find their way around even when the content is hidden.

The internet enables an unprecedented cultural remix. Content and images are sent and distributed to masses worldwide, evolving, transforming, attached, or deconstructed into pieces and reassembled in various techniques and contexts. Online platforms and content companies are waging a tireless war against online piracy, fighting copyright infringement for royalties. On the other hand, freedom activists celebrate the death of passive consumption, welcoming the openness and communality of freely-available collaborative work.

Ben Benhorin presents a fascinating example of such work. Visit Gif Cinema, type in any movie or TV show you can think of, and the app will locate subtitles (usually also “illegal”) available online, and play it in sync with the original timeline of the movie while pulling animated GIFs featured in the background of the dialogue. The result is a new work whose duration is identical to the original film but contains no scenes from the familiar movie. Instead, you can watch a rich multitude of animations and creative associations of thousands of creators from around the world.

You may already know that Google’s search engine presents different results to different users when they type similar (or even identical) search terms. Today’s internet is based on customization. Representing both convenience and massive invasion of privacy, it creates potentially dangerous “echo chambers” or “filter bubbles,” amplifying voices digital platforms think we agree with. Tsila Hassine created Shmoogle, an alternative search engine that displays results in entirely random order. Less intelligent than current learning algorithms, her app exposes websites hidden in the last pages of Google’s results, promoting the promise of the internet as a democratic virtual space. In a move that blurs the line between artistic and corporate, Hassine had redefined Shmoogle as “Artup: an artist run-startup looking for investments.”

The TAZ is like an uprising which does not engage directly with the State, a guerilla operation which liberates an area (of land, of time, of imagination) and then dissolves itself to re-form elsewhere/elsewhen, before the State can crush it. Because the State is concerned primarily with Simulation rather than substance, the TAZ can “occupy” these areas clandestinely and carry on its festal purposes for quite a while in relative peace.

We are regularly searching for open networks in public areas. Looking for open WiFi without a password, which would allow us to log in, gain access to the network and the information it stores, and stay connected for as long as possible. We hardly notice where we connect, often overlooking both the network and the equipment that supports our communications, which remain transparent, part of the internet’s mysterious cloud.

In a series of actions dubbed Occupy WiFi, the Pirate Party sought to reshape this “public” entry point to cyberspace, turning it into a demonstration and protest area. Party members installed routers near public institutions, and people who connected were presented with specific messages designed to serve as an alternative virtual pre-roll. For example, a router installed near ​​Bialik House featured statements supporting the unionization of the museum’s workers. Another router located in Arad focused on messages against the polluting phosphate mines.

The strike is made at structures of control, essentially at ideas; the defense is “invisibility,” a martial art, and “invulnerability” — an “occult” art within the martial arts. The “nomadic war machine” conquers without being noticed and moves on before the map can be adjusted.

Your online clicks on advertisements are worth a lot of money. Advertisers are willing to pay the search engines to obtain them. Search engines use your clicks to learn more about what interests you and show you more and more “relevant” advertisements. What if the opposition to the obsessive collection of personal information by online platforms doesn’t mean that you stop clicking but rather click as much as possible?

Designers, researchers, and activists Mushon Zer Aviv, Helen Nissenbaum, and Daniel C. Howe developed a tool that leverages obfuscation as a strategy for maintaining privacy. The browser extension they designed clicks on every Google ad (without you noticing), allowing you to create a smokescreen around your true “self”: the plugin generates plenty of noise for algorithms trying to deduce your preferences from your online behavior, turning you into a ubiquitous ghost.

These nomads chart their courses by strange stars, which might be luminous clusters of data in cyberspace, or perhaps hallucinations. Lay down a map of the land; over that, set a map of political change; over that, a map of the Net, especially the counter-Net with its emphasis on clandestine information-flow and logistics — and finally, over all, the 1:1 map of the creative imagination, aesthetics, values. The resultant grid comes to life, animated by unexpected eddies and surges of energy, coagulations of light, secret tunnels, surprises.

Accessing the web requires no passport control. At any given moment, any of us can visit websites operated by foreign citizens or even governments classified as hostile. But individuals aren’t the only ones trying to take advantage of these “loopholes”; companies and governments with an ambivalent attitude to the freedom the internet provides attempt to exploit the web, utilizing it when it serves them and blocking it when it doesn’t align with their interests. Many artists and researchers are busy exposing these trends to redefine the internet as a multinational free space. Joana Moll follows trackers, pieces of code embedded in websites that enable its owner to monitor and collect user data, including location, type of device, and browsing habits.

The US is currently enforcing embargoes and sanctions against Cuba, Iran, North Korea, Sudan, Syria, and the Ukrainian region of Crimea, effectively banning transactions with these countries. Nevertheless, state-owned websites operating in these countries are using Google’s and Facebook’s trackers. It’s important to remember that these digital assets are stored on servers operating in physical locations. Moll describes Algorithms Allowed “as an ongoing investigation that reveals the many US tracking and online services embedded in websites [...] exposing the ambiguous relationship between code, public policy, geopolitics, economics, and power in the age of algorithmic governance.”